Frida is a dynamic code instrumentation toolkit for developing, researching, and reversing applications. Let's dive in and see how it works!
J
Written by Jasmine Singleton
Updated over a week ago

One technique that Android applications sometimes use to obfuscate how they work is self-hooking. This, specifically, is utilized by Android packers as a way to protect the contents of the underlying application. Other examples can be seen in the wild in security products, malware, or even games deploying anti-cheat software. As a simplistic example, we will walk through how a security product can provide an "encryption" layer at rest for Android applications, without needing to be invoked directly by the application it's protecting.

Wait so, what is Frida?

Frida is a dynamic code instrumentation toolkit for developing, researching, and reversing applications. For ease of use, we’ve included a Frida daemon in all iOS and Android VMs. To activate the included frida-server, simply navigate to the Frida tab, as shown below, and select a process to get started.

For example, on Android, you must connect to adb. Once the device is connected and the local machine can see it, Frida will forward the necessary ports and connect using adb, which you can test using the frida-ps -U command:

For iOS, to use the -U argument, make sure you have USBFlux running. If you want to connect without USBFlux using -H or --host, you should add a new entry 27042->27042 to the PORT FORWARDING tab of your VM and then use:

To use the Frida tab in the Corellium user interface, you must first select a process. When you click Select a Process, you will be provided with all valid attachable processes on the device that are currently running. The list is explicitly filtered to exclude any processes that would render an error, such as processes that are statically linked or do not include libc. Below is an example of what you will see on the Select a Process prompt. You can quickly filter the list by searching in the magnifying glass field in the top-right-hand corner. 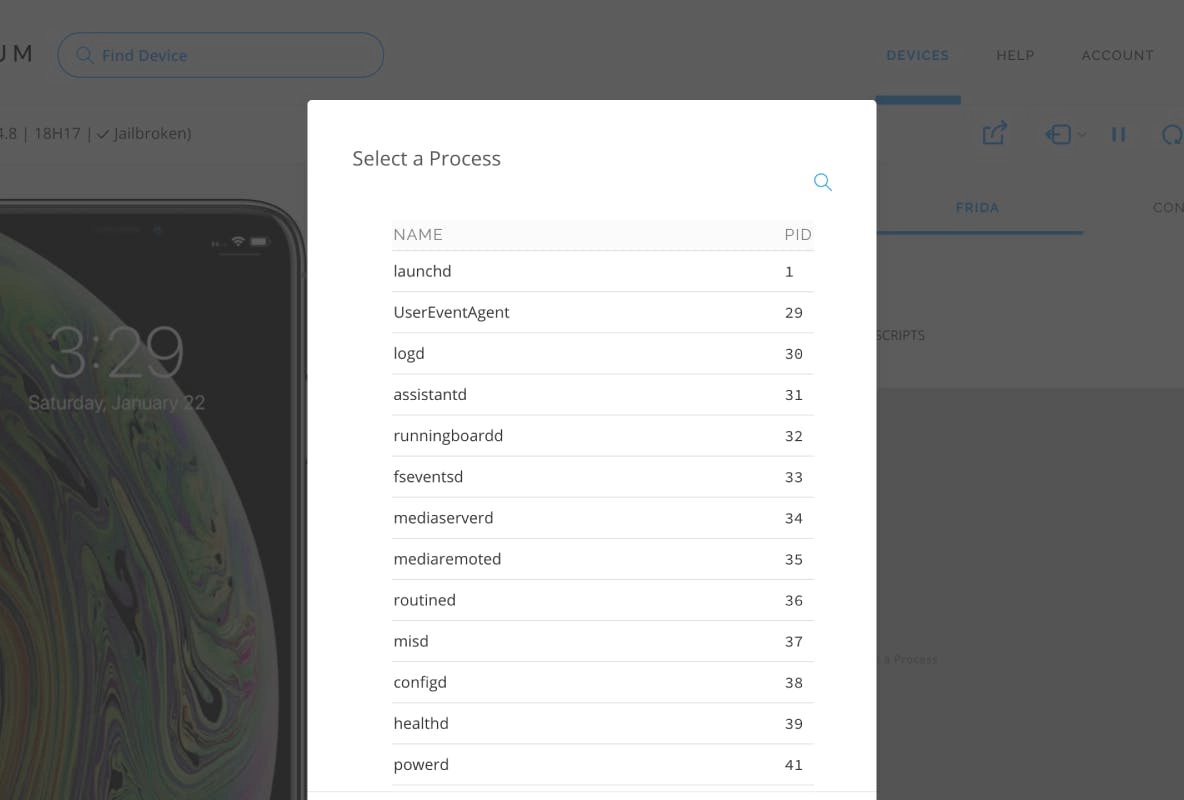 One command which is explicitly different from the stock Frida cli is the %load command. If you push a file to the VM, such as /data/local/tmp, and want to load it into the console, you should use this command.

The general idea is that, before an application makes any system calls to bionic-libc, the security instrumentation will place a hook on the functions it wishes to intercept. So for this example we will study a write-to-disk-encryptor. The general flow of any Linux based application from the system level would be as follows when writing to the disk:

Easy, right? Now at a very high level, when an Android application calls a higher level system API for writing a file to disk, this is still what happens below the hood. The developer doesn't need to know this, it just happens. So when writing security tooling around this, we can approach it at the very low level and let the system perform all our work for us.

In order to do this, we would want to utilize the following steps:

So how would this actually be accomplished? While there are a few different ways, one common one is to patch the function you want to intercept, in memory, to point to your own function. You would then remember the original address for the function, and call this at the end. At a high level, this would be replicated in Frida like the following:

Note: To actually do this inline with an Android Application, you would need to write some native code to perform the actual hooking, though hopefully this is illustrative enough for the example. More information on this can be found in a few different places, like the Android GOT Hook article.

This can be pretty useful for folks who want to obscure how things are being done to both the system and the application developer. Though as a reverse engineer, we want to be able to find these things quickly. This is often the case when working on a bug bounty or pentest of an application which has used some type of protection like this. If the protection is bought and not developed in-house, it is merely a hindrance to get past and not often part of the assigned scope of the test. This is when looking for these hooked functions can be a nice way to speed up analysis and avoid spending time unwinding obfuscation or reversing a protector.

Utilizing a Corellium Android Device for this has become my go to for speeding up analysis of such applications. After we had added the Frida tab, it sped up my process even more. Previously, when writing unpackers for certain Android targets, I had modified some scripts I found online which did patch checking. After extending this to fit my needs and keeping it up to date with different Frida and Android releases, I'll be utilizing it as an example to show how to use the embedded Frida on Corellium devices. The basic idea for this script is to read the contents of loaded shared libraries from the disk and compare them to those that are loaded in memory. If we find differences in the code segments, we likely know something has been changed, and it would be good to investigate them.

For this tutorial, we will be installing the Signal application on Android 11 as I know that the DJI Fly app uses the SecNeo unpacker which uses this method under the hood

If you want to replace the built-in Frida server, to run a different version or a customized Frida server:

Replacing 10.x.x.x:5001 with the correct Services IP listed on your device page.

Assuming frida-server has been run properly, frida on your host machine should automatically see this as a connected usb device. You can test this by running the normal frida-ps -U command.

If you have more than one device connected to the host machine with `adb` enabled, then scripts and different commands may have issues identifying which device to talk too. When connecting to a device over tcp/ip, the "serial number" becomes the ip address and port. This means you can identify the devices using the `Services IP` for both adb and frida commands like below:

For usage in a frida script, you'll need to utilize the Device Manager and assert which device you want to connect to. Below is an example python script which would load a script against a specific package name:

Replacing the Built-In frida-server on Android

Replacing the Built-In frida-server on iOS

So what exactly are we seeing here? Essentially, if we dive into the hook_finder.js code, we have automated the process of reading a subsection of the modules loaded by the application from disk, parsing their headers to identify specific segments of the ELF file, and then comparing the contents of the .text and .rodata sections to those that are found in memory. While this won't detect all forms of hooking, it does detect a fair amount of those used by Android packers.

At this point, one should be able to take the code as it currently is, and extend it to analyze what has changed and try to understand why. Many of the things hooked are in relation to the above example used in this blog, while others are likely used for other packer features. We could expect to find that the code injected, causes the caller to jump to a memory location within the packers library. What this library might do with each function call from there is an exercise left to the reader.

Feel free to join our Slack to discuss this post or ask any questions you may have about it.

Did this answer your question?